Every other year, Baden-Württemberg’s Ministry of Economic Affairs, Labor and Tourism awards municipalities for successful startup support with their "Start-up BW Local" competition. Minister Nicole Hoffmeister-Kraut recently announced that Heidelberg has been awarded for the third time in a row, reaching the finals for the second time. 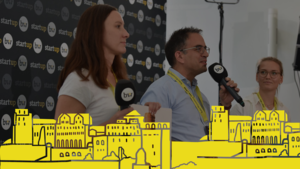 "We are very happy about this appreciation of our work," says Thomas Prexl, Managing Director of Heidelberg Startup Partners e.V. and Director of Startup Support at Heidelberg Technology Park. Together with colleagues from Heidelberg’s department of economic promotion and creative industries unit  as well as the regional chamber of industry and commerce, he has been responsible for the entry to the competition."With our placement among the top three, we may now present our concept again at the Startup Summit on September 30 in Stuttgart." Then it's about the first three places and up to 10,000 euros in prize money.

Minister Nicole Hoffmeister-Kraut, congratulated the award-winning municipalities and was impressed by their great commitment to creating startup-friendly structures. "With our state competition, we want to promote municipalities as startup-friendly business locations and show that they are not alone in supporting startups, but can make a major contribution in their Start-up BW startup ecosystems. The inter-communal project approaches in particular show how valuable regional networking and the creation of target group-oriented additional offers are," said the Minister.