Handover of the Baton at the German Association of Innovation, Technology and Business Incubation Centers (BVIZ)

Berlin, 13.09.2021
The longstanding President of the BVIZ Dr. Bertram Dressel from Dresden did not stand for re-election at the 56th general meeting in Greifswald and handed over the baton to the newly elected President Dr. Christina Quensel from Berlin-Buch. We interviewed both and took a look back and into the future of the association. 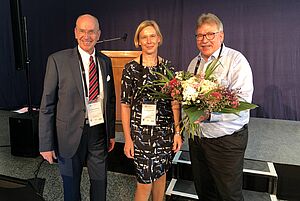 Mr. Dressel, you were elected president at the BVIZ's spring meeting in Itzehoe in 2001 and have led the association in this role for 20 years. You were re-elected every two years, even though you had announced your resignation well in advance. Is this also not an acknowledgement of excellence from the members of a very successful long-term presidency?

Actually, I am not the right addressee for this question. But you are happy when you can win over others with your style and your work. I wanted to hand over the president's baton to a younger person earlier than this. Unfortunately nobody was found who wanted to succeed me. Only when I finally definitively did not stand for re-election the process moved and I am pleased that we were able to elect a young, successful center manager in Christina Quensel as president.

Many events come together in two decades. What is your fondest memory and what was the most critical moment of your presidency?

The representation of such a dazzling association like the BVIZ is wonderful per se, that has always given me pleasure and also given me strength. Meeting colleagues in a family-like atmosphere was and is important to me and those are the many wonderful moments. The most critical moment was the insolvency of our Service GmbH, caused by a person whom I - as it turned out - completely but wrongly trusted. For me that was also a lesson in terms of knowledge of human nature.

You have been Managing Director of the Dresden Technology Center since 1990, shortly after Reunification of Germany, and in the same year you became a member of the BVIZ, an association from the west at the time. What made you do it back then?

I am not a transfer person or center manager by nature, I am a process engineer. When the turning point came a lot new things like tech centers came upon us and we had to learn how that all worked. The BVIZ helped us a lot. There was a continuing education program for center managers from the new federal states. That was vital and that is why we became a member. However I have never regretted that and we became involved right from the start. With Guido Baranowski, who was BVIZ president before me, I also had a partner in the “West” who helped to cobuild all this.

Have the East and West of Germany in the BVIZ grown together 30 years after the fall of the Berlin Wall?

I think so, the next generation no longer knows this difference. I generally do not see any divisions and fortunately not everyone is the same in this country. There are regional differences and that is a good thing. In the end, East and West are not identical either, but they have advantages and problems that differ. It is this diversity that enables us to learn from one another and thus become creative.

You were then elected to the BVIZ board in 1995 and have since followed the development of the association up close and helped shape it. What were and are the greatest challenges?

For me it was always important to capture the diversity of the members and to develop offers from this that as many as possible can relate to. The cooperation requires trust, which was not easy at the beginning. I remember the beginnings of the AG Zentrumsbetrieb from which many feared would divulge insider knowledge. It was only later that they realized that it helps to question one’s own position, quite the other way around. Another challenge was the State Association of North Rhine-Westphalia, which did not consider representation of interest at federal level to be necessary. Here we had to drive intensive mediation and in the end we were successful. Even today it is important for the BVIZ board to question its own formats again and again. Another important point for me was and is the financial basis of the association. The association also needed a premium adjustment due to inflation and a changed membership structure. This is the only way we can stand solidly here today and have more members than before.

Ms. Quensel, you are the first female president of the association and you are also responsible for the generation change on the board. What made you choose to run for office?

For me, active exchange on all sorts of topics in the work environment is always very important, which I can also contribute to. In this way you can benefit from experience and gain new and surprising insights in the discussion. An association needs people who are committed. And I think it is time to give something back too. Another reason is the fact that it is really also time for a woman to take the lead. This may sound like a cliché, but for me, real visibility and responsibility are far more important than perfectly gendered texts. I would be very happy if this encouraged other women to step into visibility.

You have been Managing Director of Campus Berlin-Buch GmbH since 2015, a large biotech park with 31,000 m2 that was already a BVIZ member. What was your first impression of the work of the Federal Association?

In 2015 in Wuhlheide I came too late to the general meeting in the run-up to the annual conference because I lost my way on campus. As always, the back rows were already taken (actually why, I would be so pleased if that would change) and only seats free in the middle at the front. So I pushed my way past the outer seats - what happened was what had to happen - I knocked over at least two glasses of water from the participants in the row behind... Regardless, my first impression was a great welcome. Overall, my colleagues welcomed me very openly, and I particularly appreciate the exchange in the BioParks group. Especially with larger considerations / projects, it is very helpful if you can simply call your colleagues and ask for advice.

In your opinion, which topics are important for successful future association work?

We are experiencing constant change worldwide, with effects on international cooperation, but also by the competition and thus on the type and scope of our own work. Some of our topics will not be fundamentally new, but their specific content will constantly face new challenges: digitization of our own processes, services for leaseholder companies, marketing, lobbying for shareholders, networking in the center, in a creative way etc. Through today's digital meetings interested groups can find each other and exchange ideas much faster. We will test different formats in the BVIZ in order to find out which offers besides the working groups are helpful for the members. The second important function must be to increase the visibility of our association in order to better advance common demands such as an innovation fund for young, highly innovative companies.

More than half of the BVIZ members tend to operate a small center or are based in rural areas. What can the association improve specifically for this target group?

I would like to directly follow up from the previous answer to this. There are questions around how small centers can learn from large centers, but there are also many very specific issues that small centers can discuss in their own group. Above all, small centers should not be shy of contributing their topics. It can also be industry-specific questions, e.g. to support green or social start-ups, where the centers face the same challenges, regardless of their size. It is important to quickly and flexibly bring interested members into conversation with one another.

It is always interesting to get to know more of the personality behind the office for orientation. Will the new BVIZ president tell us something about her private family life and environment?

I consider myself an open, active and very happy person, not least because of my family and our circle of friends. I am proud of my two children: my daughter is studying, my son is undertaking his A-levels this school year. Both will go their own way. They know the situation that both parents work full time and travel for work. That only worked because my husband and I are always pulling in the same direction. We coordinate our business trips, have rotating doors and in return spend time intensively together and also find enough time for ourselves. To keep a free head, I jump on the horse as often as possible and go riding.

One final question for both of you. In your opinion, what makes BVIZ Association life so special?

Dressel: We are a big family, we are very familiar with each other. From my point of view, this is very important. Everyone is at eyelevel, everyone is equal, there are no wrong questions. The board would do well to reach out to all members integratively and if possible not to divide things into good and bad. And I will probably go to the “family reunions” again and again - I promise.

Quensel: The trusting, friendly interaction and exchange with one another. Our technology parks all work a little differently, many are supported by the city or municipality, there are many centers that have to support themselves or are completely privately financed. These different backgrounds are also our capital, new things grow out of differences. The more you let others share your knowledge, the more you get back. I hope that we will approach others more openly at our annual meetings and that we will not remain in the circle of well-known colleagues. That works very well, but I think there is still some room for improvement here.

Thank you for the interview!

The interview was conducted by Dr. Thomas Diefenthal, BVIZ Vice President from Regensburg.