The Ministry of Economics approves funding for eight Start-up BW Accelerators with a total of 5.1 million euros. The Up2B Accelerator and the Life Science Accelerator, which the Heidelberg Technology Park operates together with partners, are once again included. 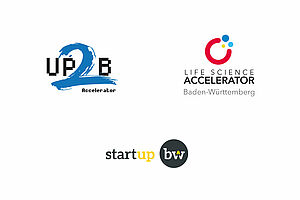 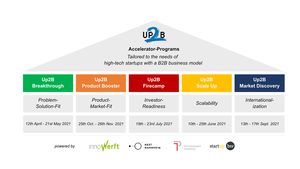 "We are very pleased that our Up2B Accelerator and the Life Science Accelerator have once again been awarded by the state government. This puts us in a position to continue to optimally support our startups in the Industry Tech and Life Science sectors in the future," says André Domin, Managing Director of Technologiepark Heidelberg GmbH.

In addition to Up2B and the Life Science Accelerator, six other accelerators are among the selected initiatives. According to a press release from the Ministry of Economics, Economics Minister Dr. Hoffmeister-Kraut was impressed by the high quality of the project proposals submitted: "Our Start-up BW Accelerators are an important building block in the state's start-up support. With them, we successfully support start-ups in technology-oriented fields of the future."

"We want to make Baden-Württemberg the most dynamic region in Europe for start-ups and therefore launched the Start-up BW state campaign in 2017. The great commitment of the state partners proves that our state campaign has significantly developed Baden-Württemberg's start-up scene over the past four years. For example, 3,000 founders were qualified in the nine previous Start-up BW Accelerators," the minister continued.

The Up2B Accelerator (https://up2b.io/) is a joint project of Technologiepark Heidelberg GmbH, NEXT Mannheim and innoWerft Walldorf. It is co-financed by the state of Baden-Württemberg. As one of eight Start-up BW-funded accelerators in Baden-Württemberg, the Up2B Accelerator advances start-ups with a focus on IT, Industry 4.0, Internet of Things and Big Data with a focus on business-to-business customer segments.

The Life Science Accelerator Baden-Württemberg (http://www.lifescience-bw.de/ ) is a joint program of Technologiepark Heidelberg GmbH, Heidelberg Startup Partners e.V., the Department of Economic and Structural Development of the City of Mannheim, and MAFINEX Gründerverbund e.V.. The program supports scientific and technological startups focusing on biotechnology, medical technology and digital healthcare. The Life Science Accelerator Baden-Württemberg is funded on a pro-rata basis by the Baden-Württemberg Ministry of Economics, Labor and Housing.

To the press release of the Ministry of Economics...