The second stage of the master plan procedure "Im Neuenheimer Feld" is nearing completion with the meeting of the municipal council on the 23rd of July. 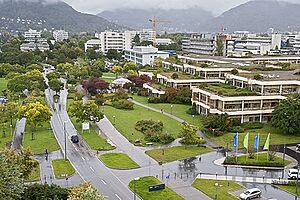 The master plan procedure, which was adopted in 2015, is intended to provide a perspective for the future development of the University and University Hospital as well as other stakeholders in the Neuenheimer Feld. In February, the project management organisations (the state of Baden-Württemberg, the Ruprecht-Karls University and the city of Heidelberg) agreed on the planning of the Astoc office. Among other things, Astoc convinced with the idea of a so-called "campus fleet" in the area of infrastructure. According to the project sponsors, this could also be combined with a cable car. Good ideas of the three other offices involved in the competition were to be integrated by Astoc and a responsible planner was to be appointed.

The Urban Development and Transport Committee, on the other hand, selected the design of the Höger office as well as the design of the Astoc office for the development of the Neuenheimer Feld on the 1st of July, but without clearly assigning the roles. Höger's approach is a strong densification of the area in order to avoid building on the Hühnersteig as far as possible. Up to two basement floors are also to be used as laboratories and offices.

CEO Dr. André H. R. Domin commented on the latest developments in the master plan process: "As a technology park, we represent the interests of our tenants to the outside world and are aware that we are in global competition for the settlement of highly innovative companies and excellent researchers. The attractiveness of the campus itself - in addition to the high quality of life in Heidelberg and the region - plays an increasingly important role in this process. We are therefore of the opinion that an extreme densification of the Neuenheimer Feld Campus with up to 20 floors would not offer an attractive working environment and would result in the opposite of a sustainable campus.

I therefore very much hope that the local council will make the right decision in planning a competitive campus development and choose a clear responsible person who will lead the way in bringing together the best ideas of his and her colleagues".